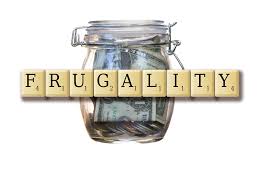 Frugality is the quality of being sparing, thrifty, prudent or economical in the consumption of consumable resources such as food, time or money, and avoiding waste, lavishness or extravagance.

In behavioral science, frugality has been defined as the tendency to acquire goods and services in a restrained manner, and resourceful use of already owned economic goods and services, to achieve a longer term goal.

The simple question that comes to one’s mind is Why should I be Frugal and cheap when I can afford all the luxuries of life, isn’t the whole idea of earning money is to spend it. What is the point of slogging all your life, when you can’t even enjoy it.

These are all valid questions. Lets take them one by one.

In fact there was a marsh mellows experiment done in US on delayed gratification just have a look.

Now let me tell you why you should be Frugal in Life. The experiment did not end there, they kept track of all the participants and found an uncanny correlation.

All those kids who resisted the gratification had better SAT numbers to start with.

A 2011 brain imaging study of a sample from the original Stanford participants when they reached mid-life showed key differences between those with high delay times and those with low delay times in two areas: the prefrontal cortex (more active in high delayers) and the ventral striatum (an area linked to addictions) when they were trying to control their responses to alluring temptations.

The forefathers of America were an intelligent lot. It was this base on which the great nation was built, its a different story that they are in dire straits now, since they did not follow what was told.

Current generation of Americans are drenched in consumerism, credit card is their life line, savings are zilch.

I was once watching a TV show in which a round table of finance gurus were dispensing money advice to the studio audience. One of the advisors said that people should give up little luxuries like a daily Starbucks and save and invest that money instead. A woman in the audience stood up and cried, “But what if I don’t want to give up Starbucks?” The crowd roared and clapped in approval.

These emotional fools are cutting the branch on which they are standing and for once we should not ape their suicidal tendencies.

Happiness is a mental or emotional state of well-being defined by positive or pleasant emotions ranging from contentment to intense joy.

Psychologist Martin Seligman asserts that happiness is not solely derived from external, momentary pleasures,and provides the acronym PERMA to summarize Positive Psychology’s correlational findings: humans seem happiest when they have

In fact studies on money and happiness have shown that money cannot effectively “buy” much happiness unless it is used in certain ways.”Beyond the point at which people have enough to comfortably feed, clothe, and house themselves, having more money – even a lot more money – makes them only a little bit happier.”. A Harvard Business School study found that “spending money on others actually makes us happier than spending it on ourselves”

Can Mind be Compartmentalized.

Our mind is not compartmentalized, its not that you can instruct it to be frugal in some matters and extravagant in others. Frugality as it appears is a philosophy, a way of life and once taken, would reflect in every aspect of one’s life.

A Frugal Person will never go to an auction because he knows % chances of him getting a deal is zilch.

A frugal Person will always invariably sniff out a steal.

I observed my dad use to go late for his every Friday vegetable shopping as at that time the shopkeepers were in a rush to pack and dispose off at throw away prices.

When looking to buy into companies in the secondary market, I am always interested in a frugal CEO and extravagance is a red flag.

The reason is simple, Frugality cannot be compartmentalized, if you have spotted a Frugal CEO, be assured that he would be saving, cutting cost on everything and must be running a Tight ship.

That is why Warren came impressed after he met Tom Murphy, CEO of Cap Cities, who did not paint the back wall of his office building as it was invisible anyways, Why waste money!!!.

On the other end of the spectrum, extravagance cannot be compartmentalized either, so if you see this

you can draw a reasonable conclusion of capital allocation decisions.

Cost reduction is often perceived negatively, be it within a corporate organisation or in society, so inviting each employee to embrace frugality transfers the burden of cost reduction from management to the employee. In doing so, corporations introduce a moral obligation to cost cutting, proposing the notion that careful management of costs is in the company, shareholder and employee’s best interests. If done successfully, there are many benefits, including the efficiency of scale aspect when summing up individual contributions.

Like Warren says, We hire such people to start with, as success rates on changing habits is not that good.

The Idea is simple. FRUGALITY is a way of LIFE. It steers you towards contentment, a Stoic way of living, A pyramidal advancement towards self realization.

To know when you have enough is to be rich beyond measure.
Lao Tzu